It’s 1 November, 1901. Invitations sit in your possession, scrawling handwritten notes with details about how to find a treasure beyond imagination; immortality.

Along the coast sits a castle, nestled well within the mountainous forests, jagged crags, and steep cliffs. Carved into the stone that overlooks the ocean and surrounded by forest, it sits ravaged by time. A Vampire Prince, as timeless as the castle itself, watches over the stones.

But maybe it should.

A game written for the Dark Forest Jam, using Trophy rules, about a Vampire Prince and his secret to immortality.

Players designated Guild Master should read the rules thoroughly first to get a sense of the game. These rules provide only a skeleton of an outline, and not a full story. The full story is made up by YOU, the players, in a collaborative gameplay style.

Included are PDFs for the Guild Master and Players, each with the Trophy SRD for reference under the section GAMEPLAY RULES.

In order to download this game you must purchase it at or above the minimum price of $5 USD. You will get access to the following files:

Support this game at or above a special price point to receive something exclusive.

If you can't buy it at full price, you can grab a copy here! 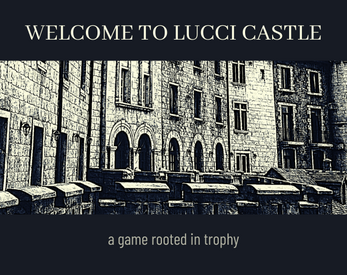